Barbara will object to Royal Mail about a proposal they are looking at to relocate the Irlam Delivery Office to Urmston. This relocation would move the sorting and delivery office over 6 miles from its current location.

Barbara will object because of the impact she feels that the relocation of Irlam delivery office could have on delivery office staff and on residents of Irlam and Cadishead. Ward councillors Roger Jones, Tracy Kelly, Peter Taylor, John Walsh, Christine Hudson and Jimmy Hunt are joining Barbara in objecting to the proposed re-location from Irlam to Urmston.

“I object to this move as I feel it would have a significant impact on the staff at Irlam delivery office and on Royal Mail customers who collect parcels from the Irlam office. Royal Mail is looking at moving the office over 6 miles away to Urmston. This would make for a difficult commute to work for staff and may be an impossible journey for some Royal Mail customers.

“Urmston is only accessible for rail passengers – there are no direct bus services between Irlam and Urmston and car drivers would encounter the traffic congestion that plagues the M60 near the Trafford Centre. I don’t believe it is fair for Royal Mail to inflict this difficult journey onto staff and customers in Irlam and I and the local councillors will be sending in our objections to this proposal.

“I will also object to Royal Mail re-locating the delivery office from Tyldesley to Shield Drive in Wardley. This would cause similar problems for delivery office staff and for people with M29 postcodes who need to collect parcels. The East Lancs Road is already so heavily congested that adding to that congestion and forcing staff and customers to make this journey is just not sensible.

“Any constituents who would like to send me their comments on these relocation proposals can do so here.”

Here is the letter of objection which I have sent to Royal Mail: 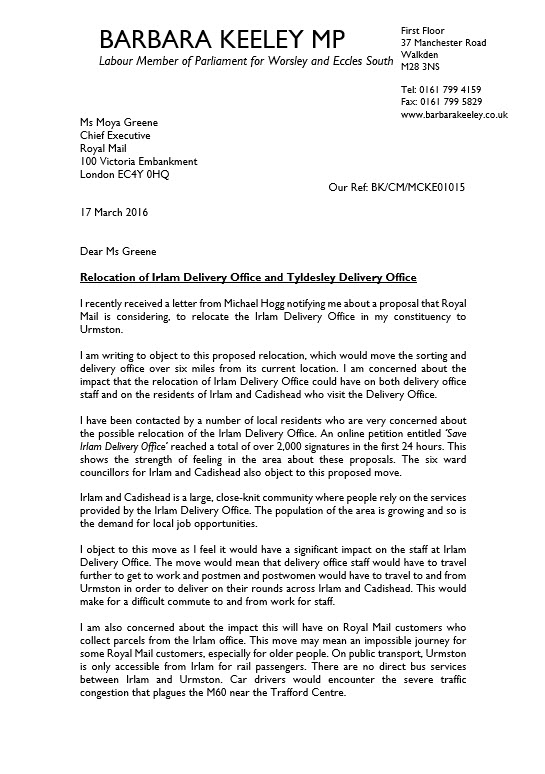 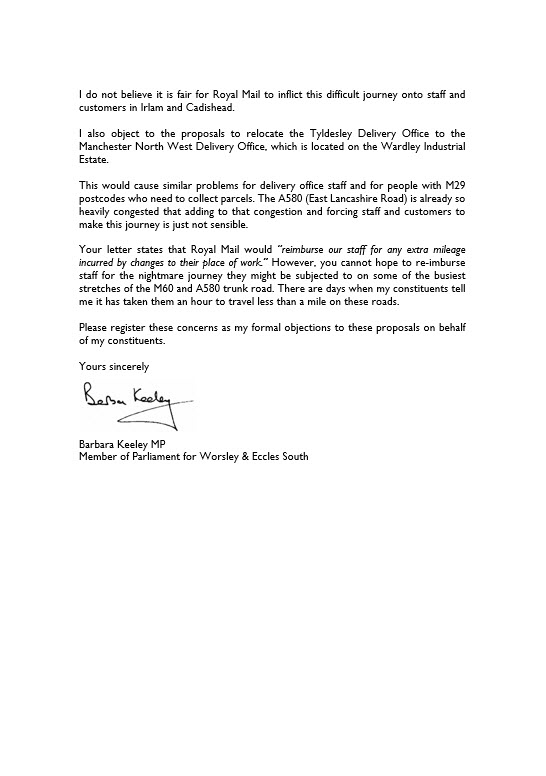